Hello again. There was a quite successful Cut & Thrust workshop at Collegium Caidis, and I thought I’d share the drill we worked on.  It is fairly simple, but there are many options for adding complexity.

Short description:
Both partners are in a neutral third guard. They are just within measure, sword points crossed, but not much more. The active partner opens the line, inviting a thrust (if not a lunge) up the middle. As the passive partner thrusts, the active one cuts the thrust away, and returns a cut to the passive partner’s head.

Lesson one – the dissuasive cut. By delivering a good cut to the oncoming thrust the Active partner gains more time than if he simply gained the line by positioning, or sliding on the Passive partner’s blade.

Lesson two – the return cut. Try to use the true edge and make the turn as abbreviated as possible. Deliver a good cut that connects with the middle of the blade.

Lesson for the Passive Partner – Good guard and thrust/lunge. Make sure your starting guard is as perfect as is it can be; your weight starts back, hand is extended, and your are pointing at, if not above your opponents head. Deliver the thrust or lunge as if it was your practice; start with your hand, include the body, and only step if you need to.

Advanced lessons
Timing and Distance. Start the drill out of measure and let the Passive partner approach. The Active partner will invite when he feels the Passive partner is at lunging distance and would have to take a step to make contact.  If Passive is not close enough the dissuasive cut will fail, if too close the thrust will land or there won’t be space for the return cut.

Keep them honest. Passive partner attempts the second intention as the Active person makes the return cut. If the Active partner does not make a good dissuasive cut, the passive partner can counter-attack. If the Return cut is not delivered from a protected place, there will be a double kill.

This drill can be done on both inside and outside the Active partner’s sword.

Cutting is a very basic thing. Most blades were designed to do it with only a modicum of direction from the operator. As you can see from the different diagrams, there is much similarity even among very different fencing manuals.

Sword cuts according to: 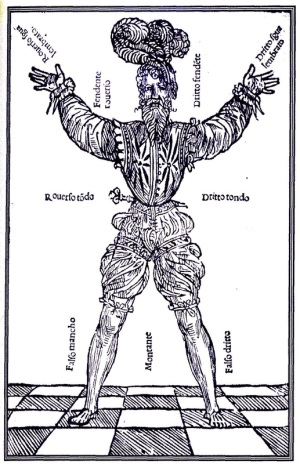 I have found one of the foundations to a good cutting game is to cut from one guard to another traveling through a very specific middle guard. (To give proper credit, this is not my own concept; it is prescribed by a few masters in our time period.) That middle guard is called by more manuals than not, Long Point. It is formed by having your sword extended, mostly from the shoulder-line, with the tip higher than the guard, usually pointing at your opponent’s head. By moving through this position your cuts are forced to move from one plane to the other, from high to low, left to right, or even on the diagonals. Look again at the diagrams – these lines achieved easily when moving through this middle position.

(There are exceptions to everything, and this is meant as a basic lesson. But one must know the basics before one can deviate from them.)
Though this is a simple position, there are many subtleties that make it successful. In solo practice, and even in controlled partner drills, I recommend adding an artificial pause to check this guard and confirm you are forming it correctly. Another advantage of this brief pause it that even though this guard happens in the middle of a longer action, it is a neutral position; you can use it to change your plan or direction depending on the actions of your opponent.

• The body is mostly upright, if not leaning a bit forward from the hip.
• The arm is extended, pushing forward from the shoulder, but not locked.
• The sword point is higher than the guard; pointing at, if not slightly above, your opponent’s head.

Special note – because this is a middle guard, happening in the middle of a cut, I am not prescribing any specific foot positions. They will depend on the methods and guards you are using.

A good way to test this guard is to have an opponent attempt to cut at your center line from long measure. As they enter with the cut, your head and upper body should be well behind your guard, and your trunk should be just out of range. You might have to direct your strong toward the assault, but you should be pretty well defended in the middle.

Once you have a good idea of what this guard is, practice cutting from one guard to another, pausing in the middle to check your Long Point guard. Remember to keep your hands soft and let the sword to most of the work. You don’t need much additional power for a valid cut; you just need to direct and control the weapon’s path. As you practice, that pause can get smaller and smaller until it is almost imperceptible. But don’t let it completely disappear and start rushing your actions. I find having a position in the middle of a large action where you can change your mind is quite useful. In fact, another fun drill is to have a partner call out a starting guard, and just as you get to that middle guard, call out a second one for you to finish with.

By Lord Patrick of Lyondemere

Darachshire, Caid – A traditionally understated and joyous event became much larger on Saturday, the second day of A.S. 50, as the Shire and Kingdom welcomed the premieres of the recently created Order of Defense. Styled as “Masters of Defense”, Baron Alexander Kallidokos, Master Laertes McBride, and Don Colwyn Stagghorn were elevated to the peerage with much fanfare, pomp, a few tears, and of course, some shenanigans. Elevations occurred at opening court, with TRM Mansur and Eilidh, TRH Athanaric and Sigridr, and a large turnout including numerous members of the Order of the White Scarf, including a few seldom seen. The event was echoed around the Known World as every kingdom elevated their own Masters, who will share precedence as Premieres of the Order.

After some words from their Majesties and Highnesses, and various presentations and awards, the first Elevation was Don Alexander, who processed in with friends, family, and a seemingly endless list of awards and accolades that was both impressive and humbling. Alexander, resplendent in silver and sable, was welcomed into the Order in a moving ceremony that included eloquent and emotional recommendations from Duke Guillaume and Duchess Felinah, among others. Don Kallidokos asked to be dubbed with the sword of Don Kelan, Premiere of the Order of the White Scarf of Caid.

Following Alexander was Don Laertes, adding some levity by processing in with a dialogue between two heralds, one of whom was his young daughter, proud of her father but stern in her praise. His recommendations from the peerages including a heartfelt one from his Baroness of Altavia (ret.) Bridget, declaring him the most skillful rapier fighter she has ever known. Laertes, in his customary verdant splendor, was also the first to have been spoken for by a Master of Defense, in this case the freshly Masterful Alexander.

The third and final elevation (to the Order) of the day was Don Colwyn. Arriving with much fanfare (including the traditional heraldry that begins a tourney bout), preceded by Pretty Fairy Niko, and arriving on a chariot of his own creation in a glowing ensemble of azure, Don Stagghorn made what is recalled by many as the most amusing entrance of the day. The seldom serious but always genteel Don was lauded by many, including his daughter Duchess Cassandra, who declared him as being made of silliness and generosity, in perhaps unequal measure.

All three Masters were presented a collar and medallion representing the peerage, and cloaks with the peerage device. In between each elevation was a bardic interlude, a welcomed touch. As His Majesty himself stated (to paraphrase): ‘…this was a rare chance to see the establishment of a new peerage, and a once in a lifetime chance to see this peerage established…’ Many felt it was an honor to be in attendance, and many were also moved by the emotion and pageantry of the court.

Following the ceremonies, a team of heralds read new language regarding the rapier peerage, Order of the White Scarf, and associated changes into Kingdom law at an optional court.

After court, the new Masters went to be photographed and showered with gifts, and the many rapier fighters in attendance signed up for an impressively deep rapier list. The tournament format was a variation on the “Bear Pit”, with the victorious fighter holding the field and earning a point, with the vanquished leaving to inform the scorekeeper of the victor. Four matches were held simultaneously in two erics, with a seemingly endless line of fighters in waiting. At set intervals, the weapons format changed; first single-sword, then with dagger, followed by cloak, and finally buckler. The semifinalists were those four with the most impressive record in each category.

The Masters all acquitted themselves well, including Laertes holding his place for over a dozen matches in a row, with many fighters both scarfed and unscarfed putting together very respectable performances and maintaining a high energy and most importantly, very fun, tourney. In the end, Don Ian F. Duncanson was victorious over Don Michael Mallory, after winning his semifinal match from the ground.

In all, the event was a beautiful day in Darach, and a fitting beginning for the Order of Defense.